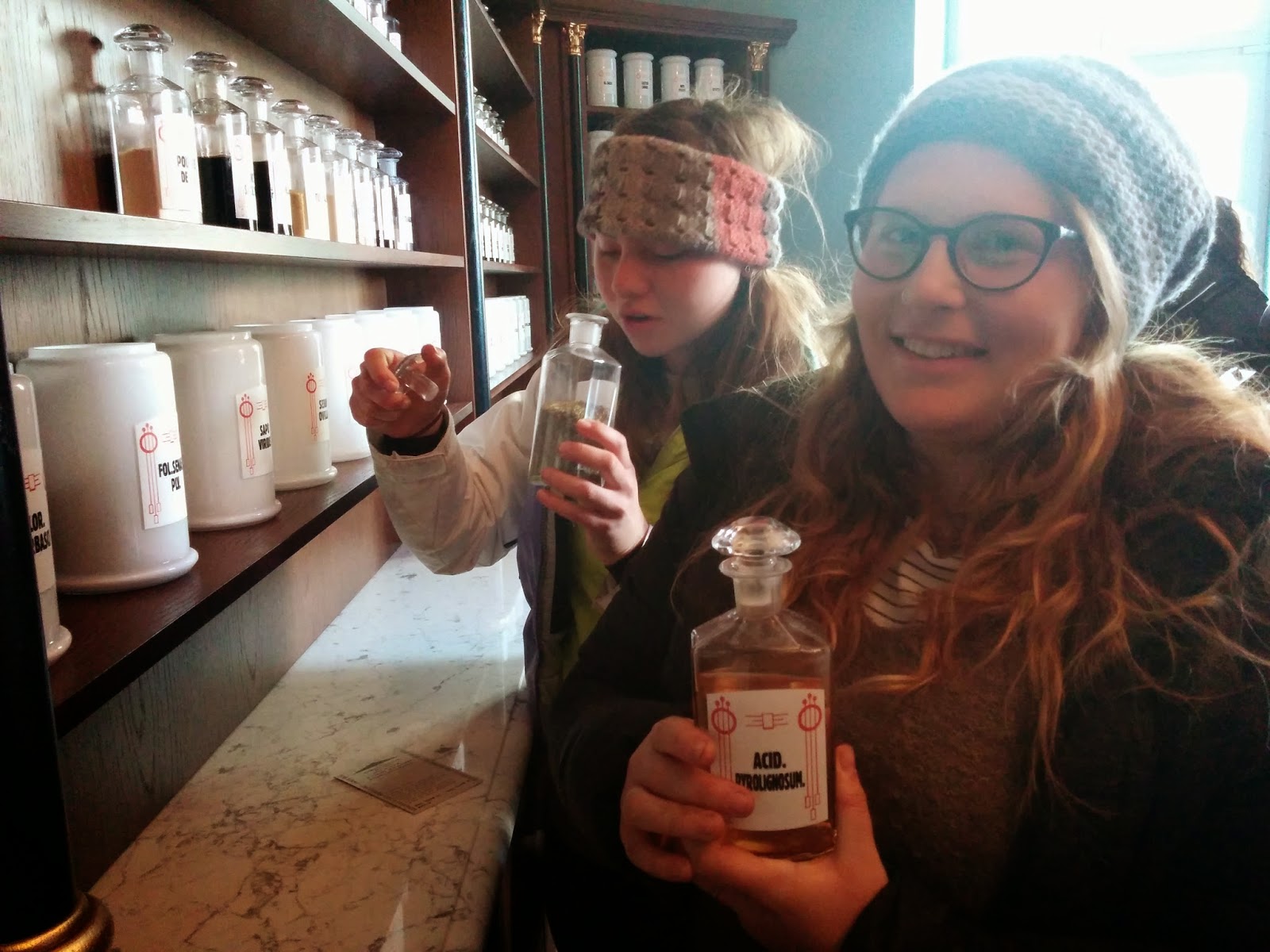 Shosh and Maya checking out exhibits at Tadeusz Pankiewicz's Pharmacy. The Pharmacy was situated at the edge of the Krakow Ghetto, and Tadeusz, a Polish national, was able to use his pharmacy's location to help the inhabitants of the ghetto, with medicine and information from the outside world, as well as helping members of the resistance. The Pharmacy was recently turned into an interactive museum. We visited on Tuesday, as part of our walking tour of the ghetto. 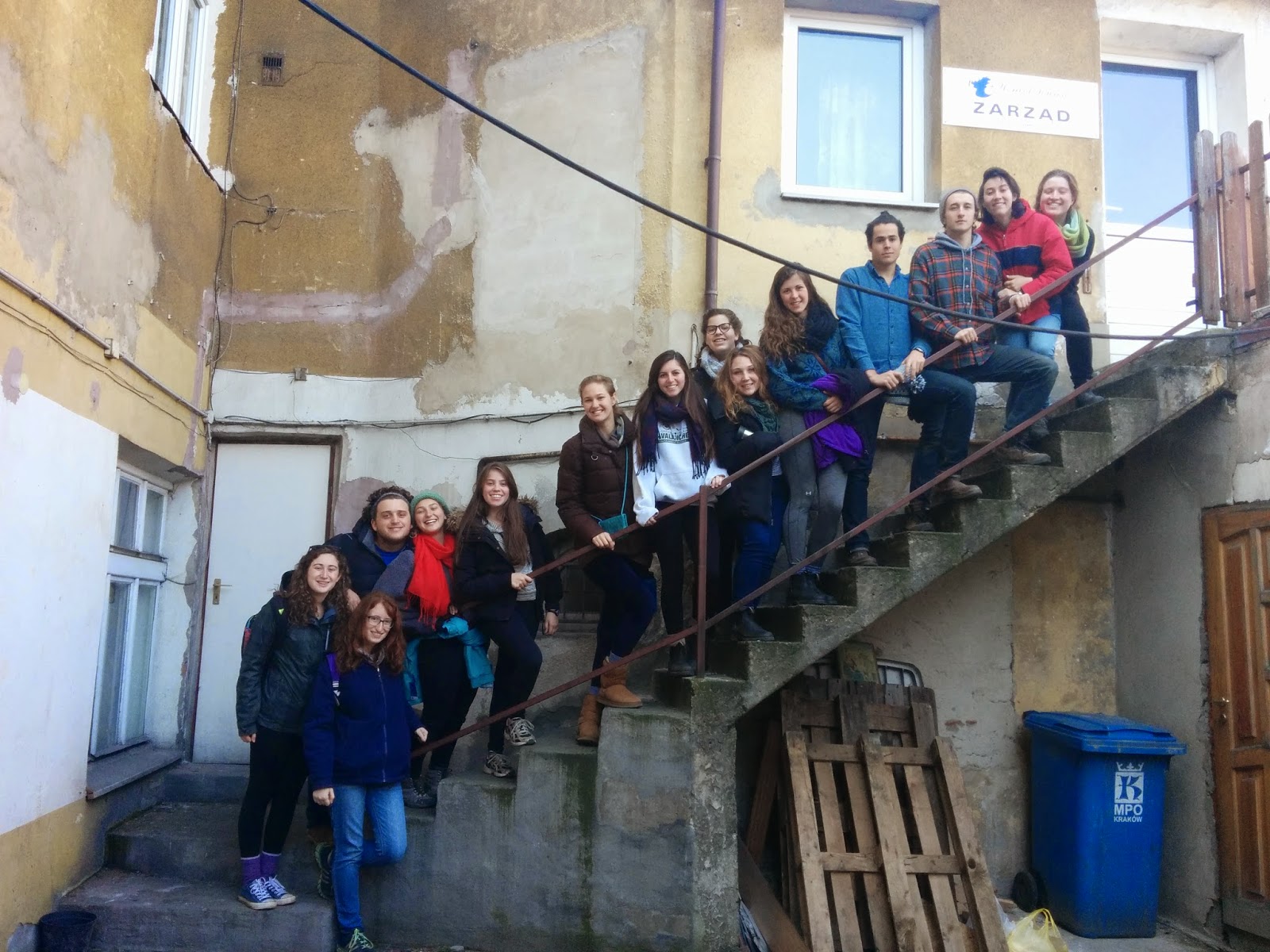 One of the Workshop kvutzot, at the site of the former Akiba movement commune. The Akiba movement was another Labour Zionist movement, close to Dror, in the interwar period. The movement members were active in establishing the Krakow resistance, and led the bombing of the Zyganeria Cafe, popular Nazi hangout. 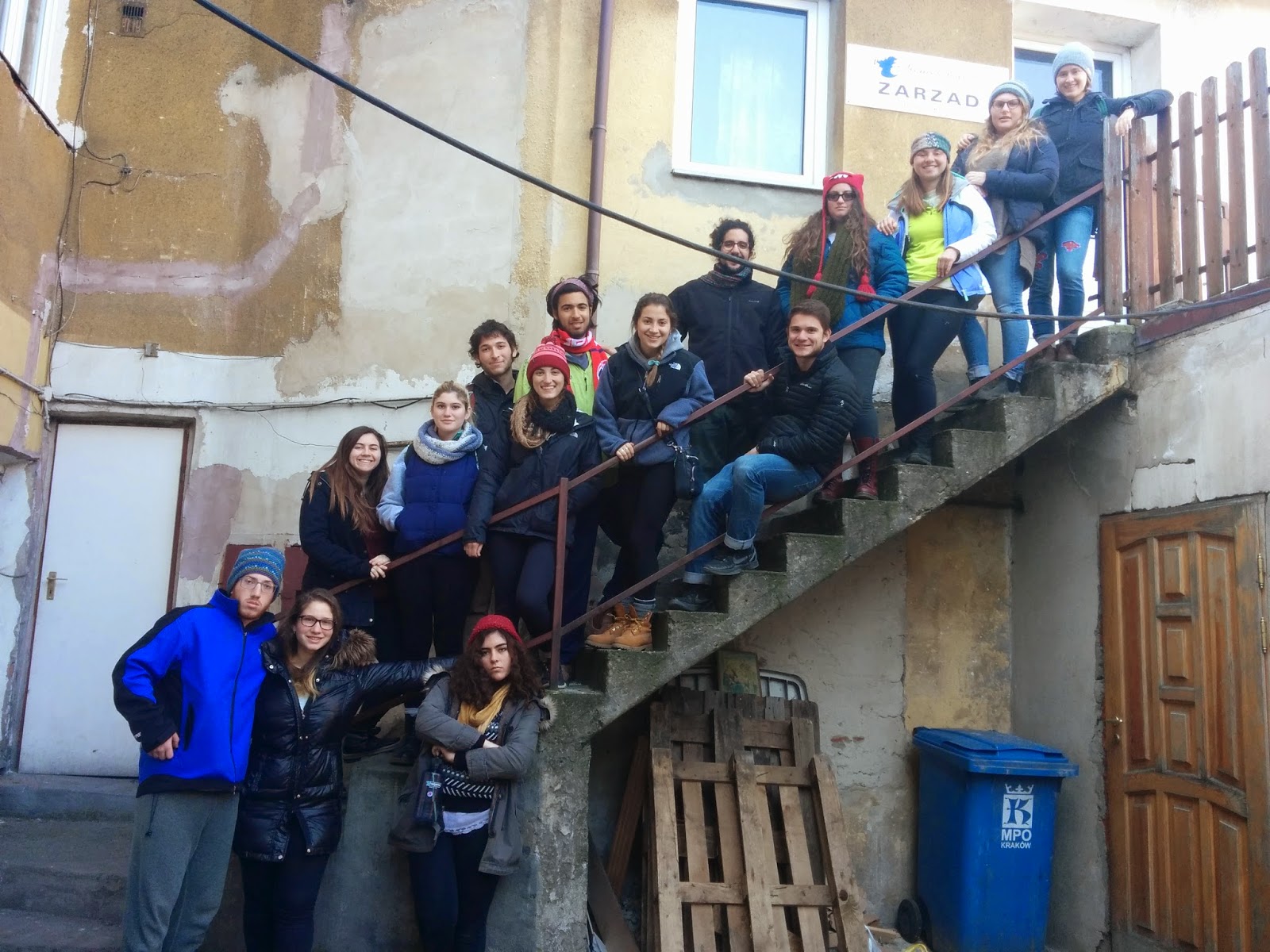 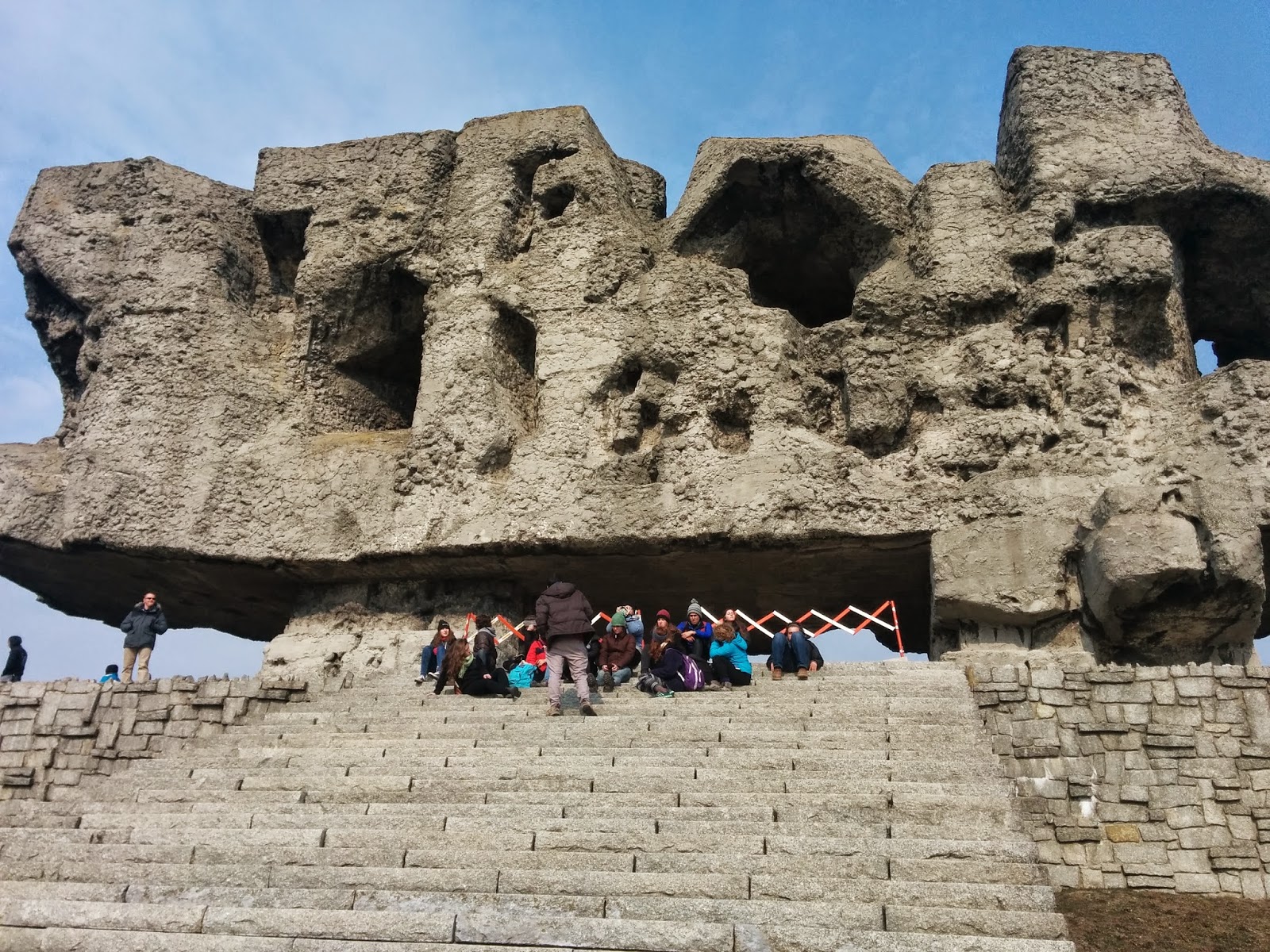 At the monument at the entrance to Majdanek, build by the Soviets after liberation. 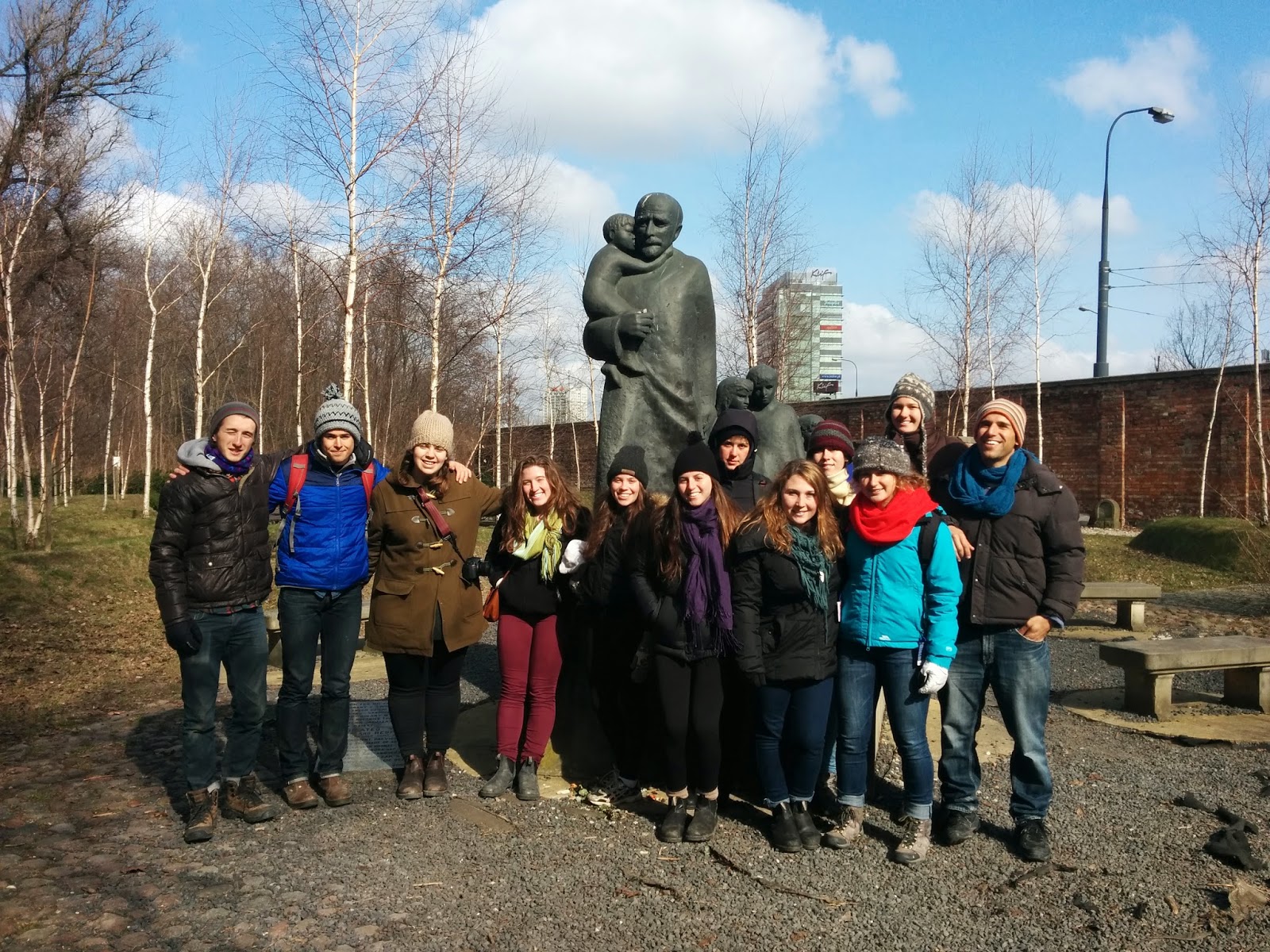 At the statue to Janush Korzak in the Jewish cemetery of Warsaw. The cemetery itself is very large, and we were only able to visit a few graves, but it was a fascinating insight into Jewish life in Poland before the war. We visited the graves of Marek Edelman, Bund leader, and Dr. Zamenhof, inventor of Esparanzo. Korzak was a very important educator and pioneer in the field of democratic education, who ran an orphanage before and during the war. He was murdered at Treblinka, along with the children of his orphanage. 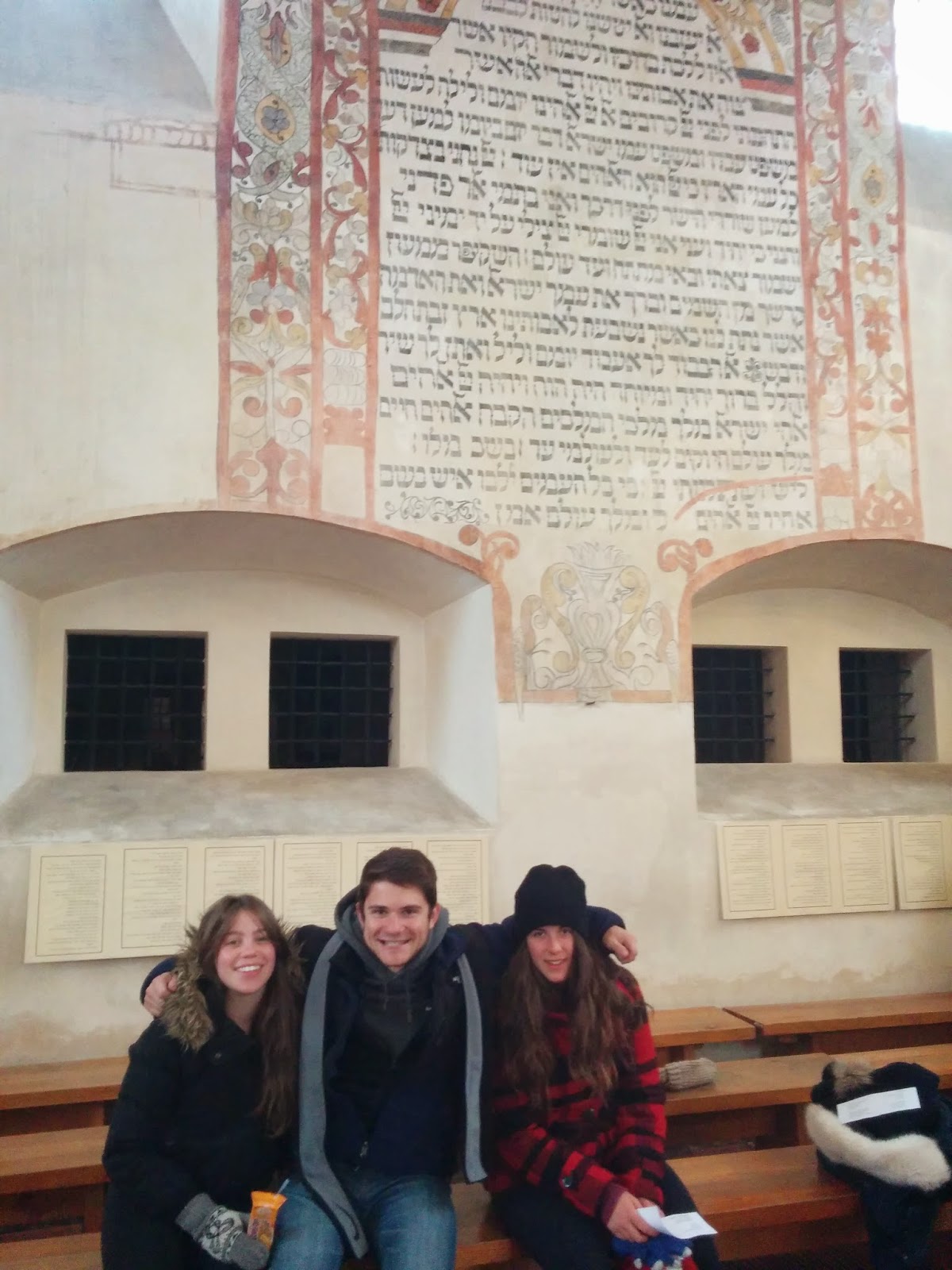 Elana, Ari and Netanya in the synagogue in Tykotchin, a shtetl near Bialystock that we visited on Friday of the journey. The Jewish population ranged between 60-85% of the village population from the 17th century onward, and coexistence was generally peaceful until the onset of WWII. You can read more about the village history here. 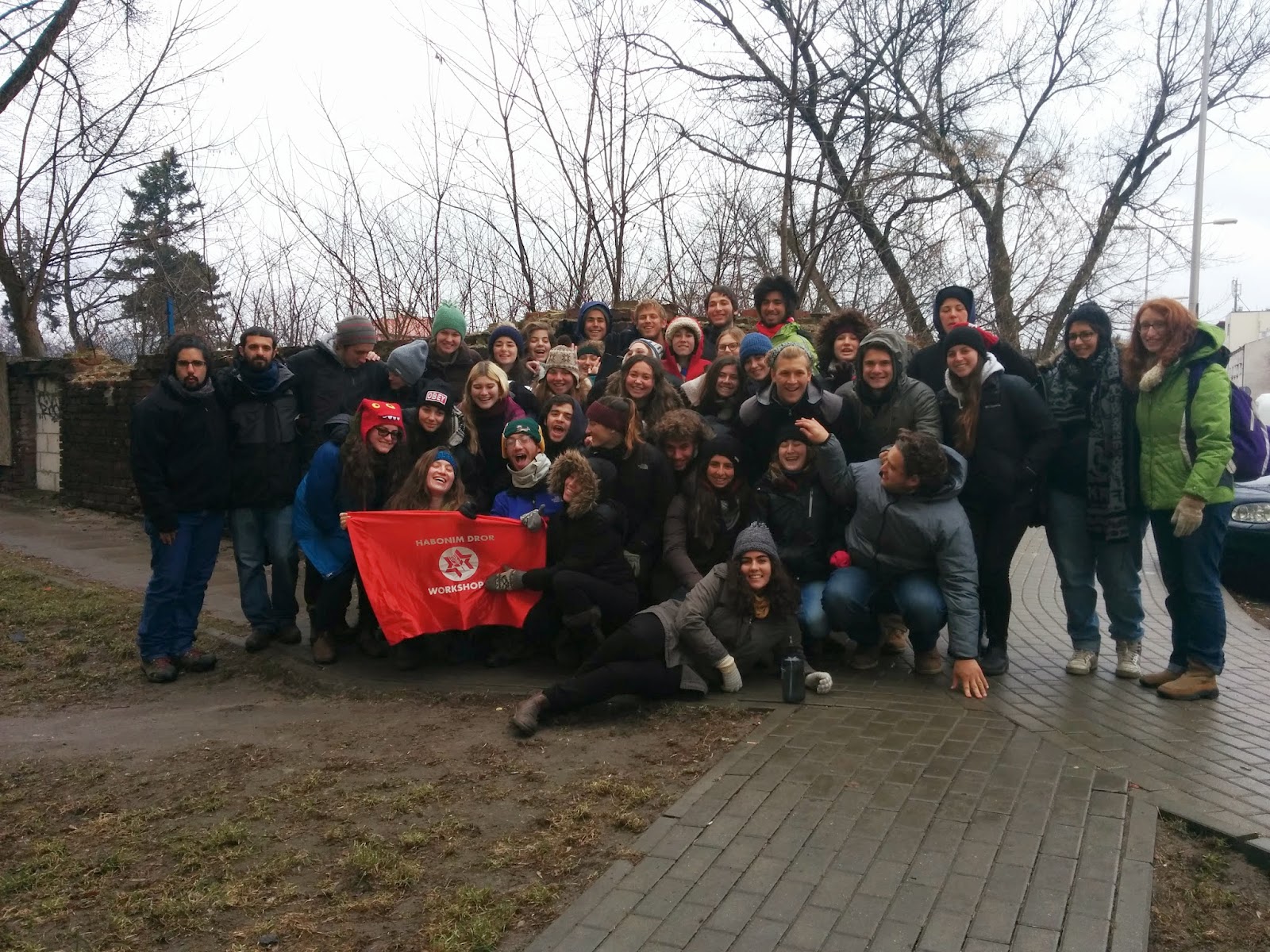 At Grochow, the former hachshara (training) farm of the movements before and during the war. Standing behind us is the only wall left from the farm. The movement was allowed to continue training members in the early stages of the war, and the farm was an important respite from the ghetto. Zivia Lubetkin, a leader of the Warsaw Ghetto Uprising and Dror member, says that the training farms and communes of the movement were the nucleus of the rebellion. 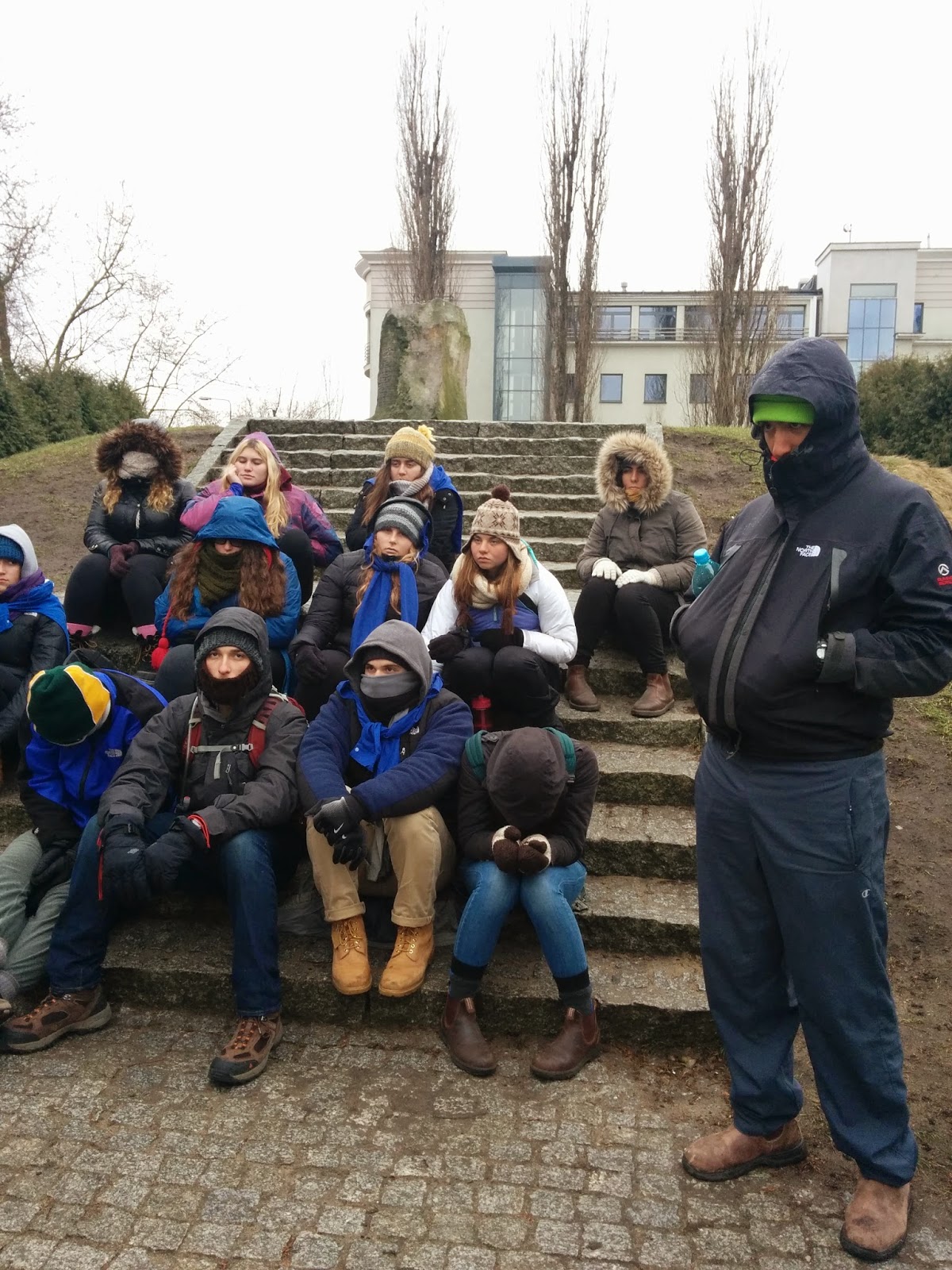 At the memorial to Mila 18, the bunker where Mordecai Anielewicz and other fighters of the Warsaw Ghetto Uprising died. On Saturday, the chanichim walked the Path of Heroism, learning the story of the Uprising and role of Dror movement. 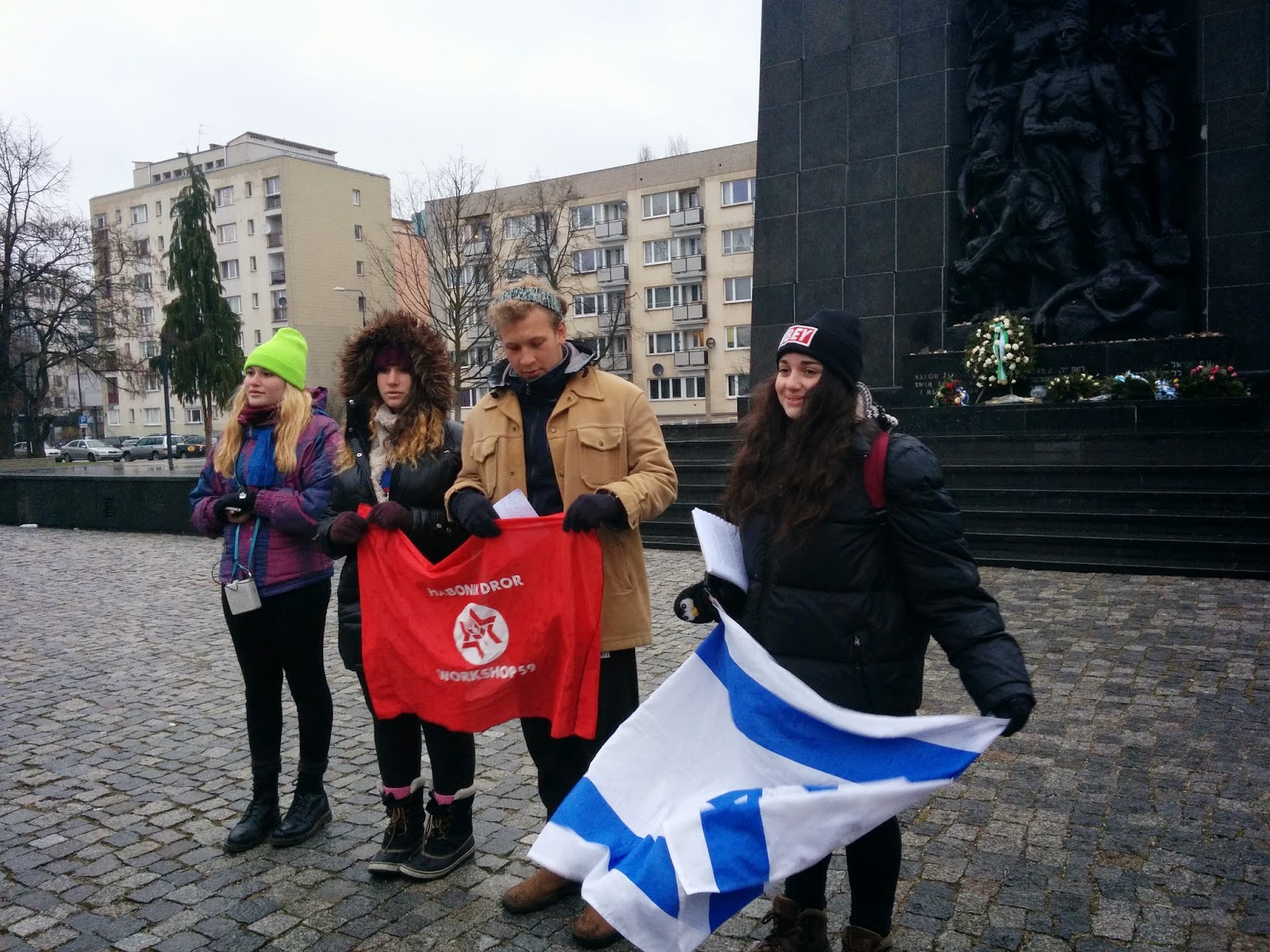 The final tekkes, planned by Patty and Rayna with two members of the British kvutza. The tekkesim were an important way for the chanichim to shape their experiences. At the final tekkes, the chanichim sang Od Lo Gamarnu, Patty played the Partisan's Song, Micaela read an excerpt from Hannah Senesh's diary, Rayna sang "Eretz eretz eretz", and Alex read reflections of his on the uprising and the movement's role before we all sang Hatikva. 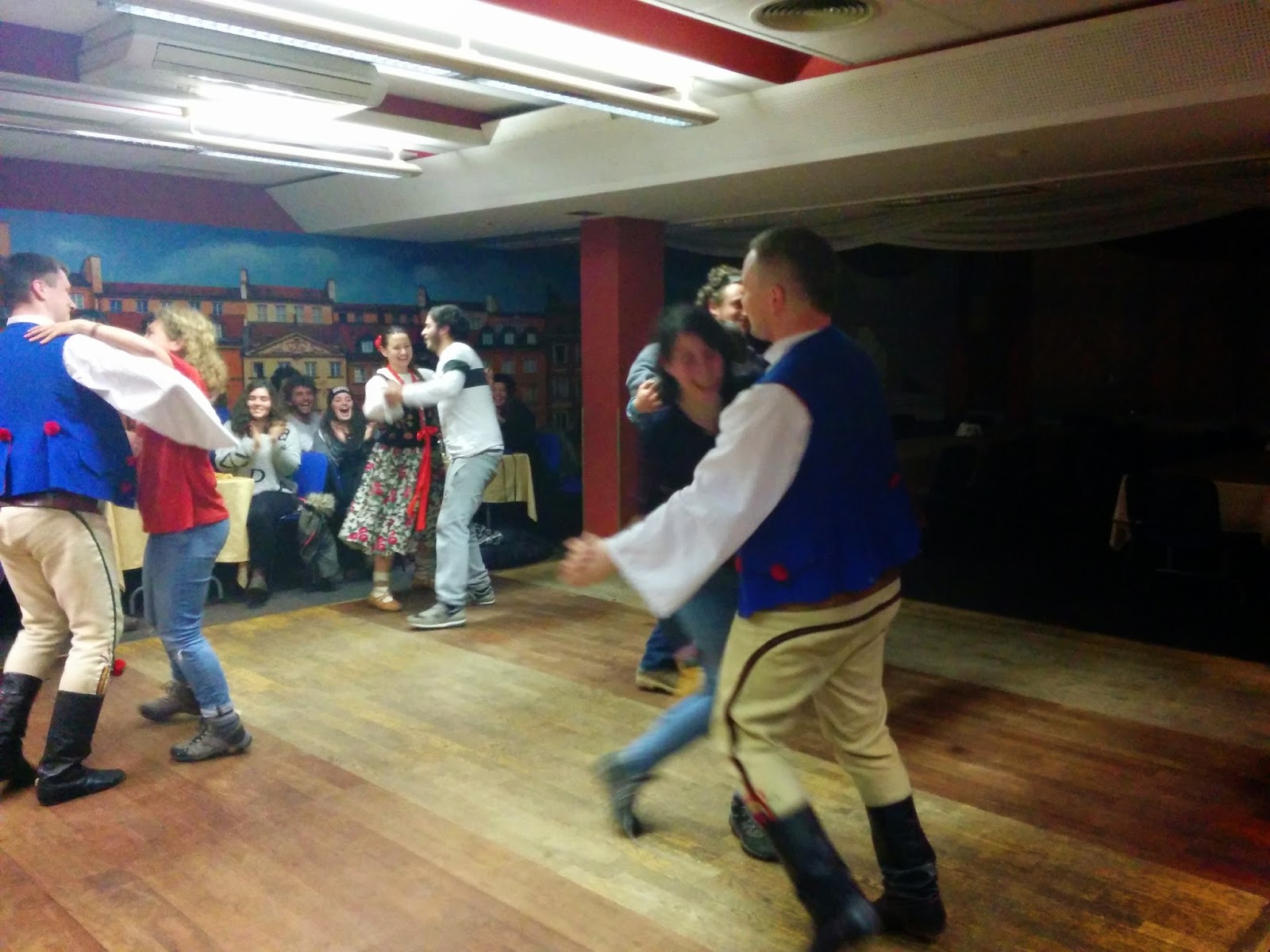 We finished the journey with some classic Polish folk dancing and singing. 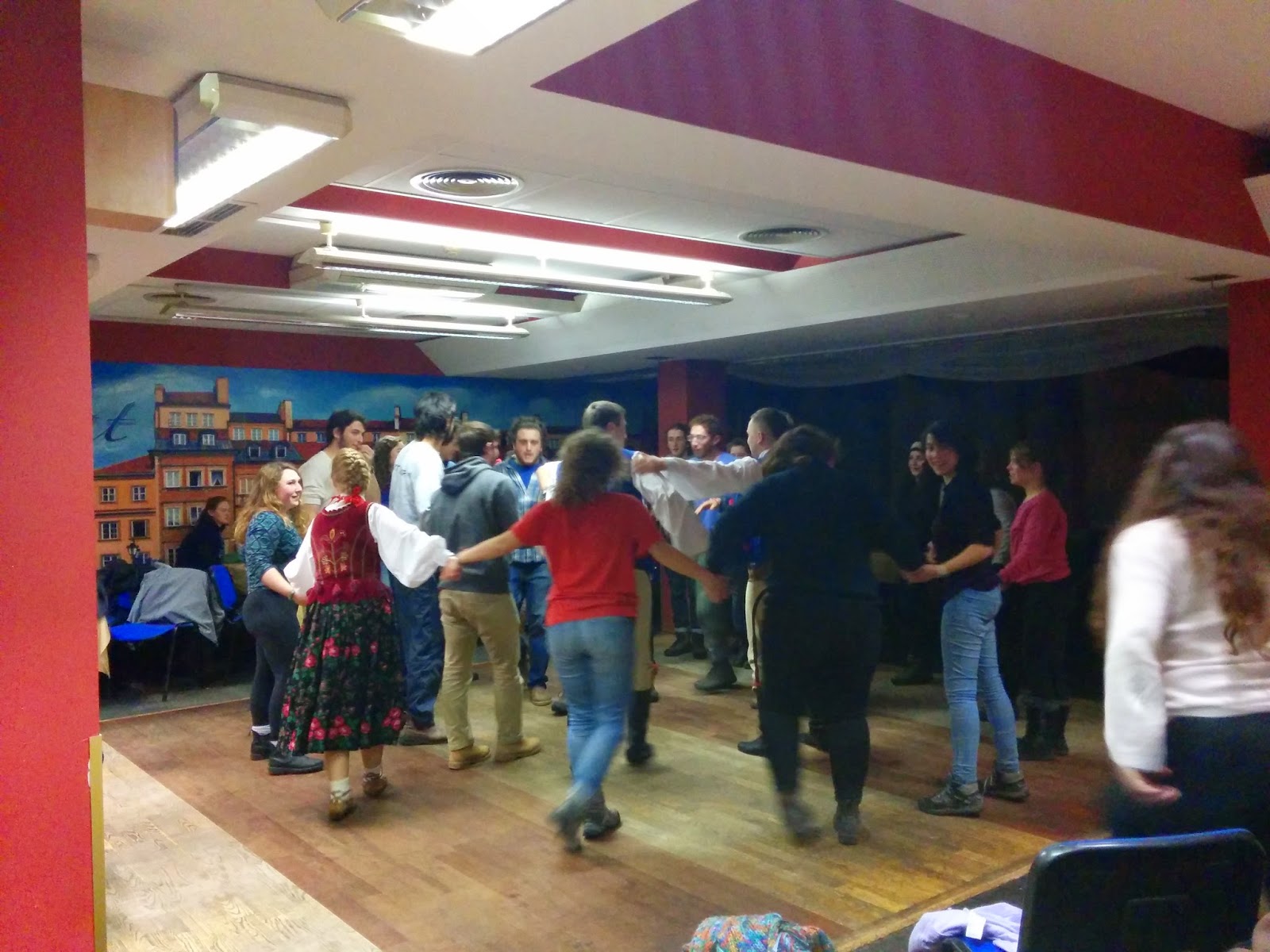 Needless to say they were all excited to join in.