The theme of this week was Dilemmas of Nation Building, examining the dilemmas faced by the leadership of the state of Israel in its early years.

The guest speaker was Yisrael Medad, former Beitar member and Begin Center educator, speaking about revisionist Zionism. It was also a chance for the chanichim to ask questions about a different Zionist vision today, as Yisrael lives in the West Bank settlements. 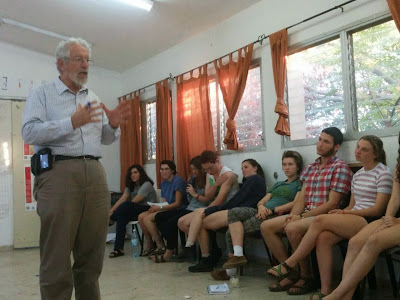 On Monday we set out from Ein Dor to the country’s centre, Tel Aviv. Our first stop found us at the Trumpeldor cemetery where many prominent figures in contemporary Israeli society are buried as well as some of the earliest Zionists who helped build the state off their Zionist vision. We visited the graves of Max Nordau, Joseph Haim Brenner, Ahad Haam and Eliyahu Golomb to speak about what the Zionist vision was and to start understanding that Zionism means taking active approaches towards shaping experiences of learning, volunteering, socialising etc in Israeli society and to bring those questions of action back home. We ended this part of the day with a question of vision and what vision we will try to create in our own lives. As a wise Zionist once said “The first step toward creating an improved future is developing the ability to envision it. VISION will ignite the fire of passion that fuels our commitment to do WHATEVER IT TAKES to achieve excellence.” – Theodore Herzl.
We took a 5 minute walk down to Frischman Beach to stand before the monument dedicated to the Altalena Affair in 1948. After the establishment of the State of Israel a question of what is to be done about Israel’s defense force loomed in the air for David Ben-Gurion. An attempt was made to unify and absorb all the different fighting military organisations, Lehi, Irgun (Etzel) and the Hagana, into the IDF which would serve as one defense force for the State of Israel. The events surrounding the Altalena Affair was an act of defiance and resistance on behalf of the Irgun to bring in additional fighters and military equipment against the orders of Ben Gurion. The IDF met the Altalena on the shores of Tel Aviv and in an attempt to stop them a battle ensued.
After hearing about the story of the Altalena it was time to make some lunch and relax on the beach and frolic in the water. Soon after we made our way to our final destination of the day, the famous Palmach Museum. The Palmach were the elite striking force of the Hagana, an underground military organisation of the Jewish community entrusted with defending the Jewish people in Palestine in 1941. The museum itself incorporates the pioneering spirit of the Palmach in an interactive and experiential way. It covered the Palmach legacy through the stories of individuals and groups and invited us to join the history of young Palmach recruits from its establishment until the end of the War of Independence. With three-dimensional décor, films and various effects, we travelled through time understanding the Palmach team spirit and sacrifices in the time of the creation of the state of Israel. 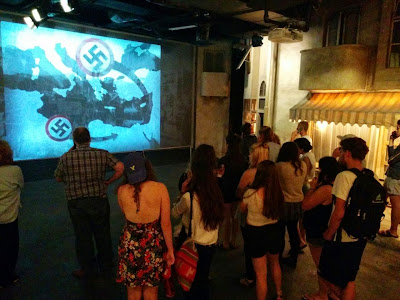